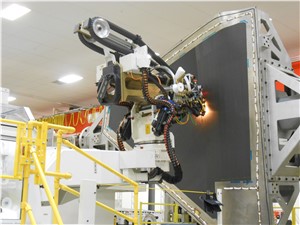 Albany International Corp. (NYSE:AIN) announced today that its subsidiary, Albany Engineered Composites Inc. (AEC), received a contract with Lockheed Martin to manufacture composite wing skins on a state-of-the-art automated fiber placement machine at its Salt Lake City operations. As a result of this and several other significant investments in technology and resources, AEC has been awarded a contract to produce wing skins for the F-35A (CTOL variant) of the Lightning II fighter jet.

The Lockheed Martin F-35 Lightning II continues to gain customers as the premier fighter of choice in the world. Delivery of production wing skins began in January.

AEC currently fabricates 227 unique parts for the F-35 program, delivering highly engineered products to 4 customers and 5 facilities including international locations. To date, AEC has delivered over 40,000 parts to support the F-35 program.

“We are very excited to see that a great deal of hard work and investment has been rewarded by our strategic customer Lockheed Martin with additional part numbers and volume beyond our existing successful relationship. We look forward to continuing to develop and deliver advanced composite technologies to the next generation of aircraft,” said Greg Harwell, AEC President.