Aerial refueling and sealift forces require attention so they can meet current and future challenges, the commander of U.S. Transportation Command told lawmakers. 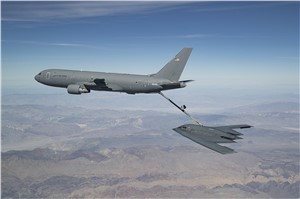 ''Aerial refueling as a force element is the most-stressed force element in the Transcom portfolio, both for day-to-day operations as well as for high-end conflict,'' he said.

The KC-46 Pegasus is an important aspect of aerial refueling tanker modernization, he said. However, delays in delivery of capable KC-46s, combined with reductions of KC-10 Extenders and KC-135 Stratotankers, have created ''a critical and deepening gap'' in aerial refueling capability for the next five to seven years, the general told the senators.

All three aircraft are used for aerial refueling, with last year's delivery of the first KC-46 marking the start of replacing the aging KC-10 Extender, which entered service in 1981, and the KC-135 Stratotanker, which entered service in 1957. A solution for the KC-46 delivery delays will likely be retention of 13 KC-135s and 10 KC-10s that were slated for retirement, Lyons said.

The No. 2 readiness concern is the strategic sealift fleet, which is responsible for moving about 90% of wartime cargo, the Transcom commander said.

''The current readiness of our fleet is below where it needs to be,'' he added.

Sealift readiness rates have declined to 59% compared against a goal of 85%, with vessel material condition and age as the primary factors. By the mid-2030s, more than half of the sealift fleet will be unusable, Lyons told the Senate panel in his written testimony.

Most sealift ships are reaching the age at which maintenance and repair costs are escalating and service-life extensions will not yield proportional increases in readiness, he added.

To increase fleet readiness, the general said Transcom is working with the Navy to buy seven used vessels. He said he anticipates the purchase of the first two in fiscal year 2021.

With 85% of U.S. forces stationed in the United States, it is Transcom's job to project and sustain the force globally in support of the secretary of defense's strategic priorities.

''Power projection is a distinct U.S. comparative advantage,'' Lyons said, noting that reliance on allies and partners increases that advantage.

Lyons provided senators with some of U.S. Transcom's recent achievements.

With a no-notice alert, the 1st Brigade of the 82nd Airborne Division was moved to the U.S. Central Command area of operations from the United States in less than  five and a half days, he said.