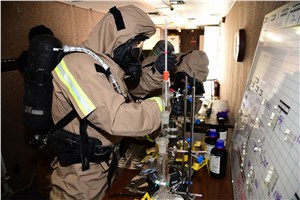 The threat posed by the use and proliferation of weapons of mass destruction is rising, a Defense Department official told a House Armed Services Committee panel.

China, Russia, North Korea, Iran and violent extremist organizations have, or are pursuing, WMD capabilities that could threaten the United States or U.S. interests, Theresa Whelan, principal deputy assistant secretary of defense for homeland defense and global security, said at a Feb. 11 hearing of the subcommittee on intelligence and emerging threats and capabilities.

"(The) WMD threat landscape is continuously changing," Whelan told the panel. "Rapid biotechnology advances are increasing the potential, variety and ease of access to biological weapons."

Whelan said DOD aims to use the National Defense Strategy's three lines of effort to counter weapons of mass destruction. One of the primary objectives is to ensure lethality by making sure U.S. forces can operate in an environment contaminated by chemical, biological, radiological and nuclear weapons, which denies adversaries the benefits of using weapons of mass destruction, she said.

Even before its charter was signed, the Countering Weapons of Mass Destruction Unity of Effort Council began working with U.S. Indo-Pacific Command to review readiness requirements and ensure it is prepared to meet them, she added.

Another of the National Defense Strategy's lines of effort is reform, and to ensure the best return on investment, Whelan said, DOD's policy office is leading an effort through the CWMD Unity of Effort Council to prioritize threats and provide related policy guidance for the department to organize operations, activities and investments around a cohesive threat picture.

A core tenet of many of the council's programs, she added, is strengthening alliances and building partnerships, the National Defense Strategy's third line of effort.

Through its work to reduce the threat from weapons of mass destruction, DOD empowers its partners to detect, prevent and reduce threats on their own, Whelan said.

"This reduces the burden on DOD resources, allows for greater interoperability and reduces WMD threats worldwide," she told the subcommittee. "The DOD CWMD enterprise's agility and expertise will enable us to address the existing and emerging WMD threats of 2020 and beyond."

Consistent with the National Defense Strategy, the effort's highest priority is maintaining the nuclear triad's viability and modernization of the nuclear triad as an effective deterrent, Shaffer told the House panel. The triad refers to the three categories of nuclear delivery systems: land-based intercontinental ballistic missiles, submarine-launched ballistic missiles and strategic aerial bombers.

Emphasis is needed on rebuilding an effective and diverse workforce that can handle future threats, Shaffer said. "We're at an interesting time for countering weapons of mass destruction," he added, "as the convergence of another number of scientific disciplines, including artificial intelligence, synthetic biology, molecular engineering and system-level autonomy, are opening the door for the development of new challenges."

Whether it is Russia or China upgrading their nuclear forces with new and advanced nuclear weapons, or the use of chemical weapons in 2018 in England, threats from weapons of mass destruction continue to evolve, modernize and expand, he said.

One role of Special Operations Command is as DOD's coordinating authority for countering weapons of mass destruction. "Our goal is to position the department to support just such coordinated action and nurture those key relationships to prevent the emergence of weapons of mass destruction capabilities, protect the United States and its citizens in our national interest of threat actors, either developing new or advancing existing programs and respond to and mitigate the effects of any use," Szymanski said.

"To address (the) global nature of the threat, we have amplified our partnership with (U.S. Southern Command) to take on additional support for the geographical commanders responsible for dealing with these adversaries," he said.