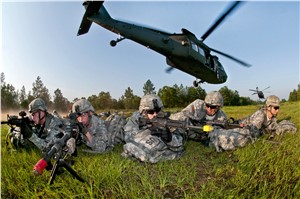 General Dynamics Mission Systems announced today it was awarded a contract for the Army Consolidated Product Line Management Plus (CPM Plus) Program from the Army Contracting Command in Orlando, Florida. CPM Plus is an eight year, single-award, indefinite-delivery, indefinite-quantity, cost-plus fixed-fee/firm-fixed price contract with a ceiling of $883 million.

"Modernizing the training experience is one of the Army's six modernization priorities," said Chris Brady, president of General Dynamics Mission Systems. "This award increases the viability, relevancy, and alignment of the Army's current live training systems while bridging to the future Synthetic Training Environment that will be delivered to soldiers worldwide."

General Dynamics will focus primarily on the extensive Live Training Transformation (LT2) Product Line, the Common Training Instrumentation Architecture, and the Live Training Engagement Composition for the Project Manager for Soldier Training portfolio within the Program Executive Office for Simulation, Training and Instrumentation.

The operational focus will be implemented through an agile, capabilities-based organization to evolve the LT2 Family of Training Systems. The intent is to reduce total ownership cost and operational complexity, to increase technology agility and concurrency, and to enable enhanced Soldier training effectiveness.

CPM Plus is a follow-on contract to CPM Next, which was awarded to General Dynamics in 2015.