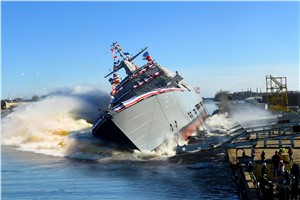 The Navy accepted delivery of the future USS St. Louis (LCS 19) during a ceremony at the Fincantieri Marinette Marine (FMM) shipyard Feb. 6.

The future USS St. Louis is the 10th Freedom-variant littoral combat ship designed and built by the Lockheed Martin-led industry team at FMM.  Delivery marks the official transfer of the ship from the shipbuilder to the Navy.  It is the final milestone prior to commissioning, planned for later this year. The ship’s homeport will be Naval Station Mayport, Florida.

USS St. Louis, which will carry into her future an important naval historical legacy,” said LCS program manager Capt. Mike Taylor. “I am extremely proud when I see the results of all the hard work and dedication of the Navy, Lockheed Martin and FMM team in building the Navy the nation needs.”

The delivery of the future USS St. Louis not only honors the second largest city in Missouri, it will be the seventh ship of its name in naval service. The first U.S. Navy warship named St. Louis was laid down in February 1827 at the Washington Navy Yard and served the nation in the Pacific, Atlantic and Mediterranean until her decommissioning in 1865 following service during the Civil War.

Several more Freedom-variant ships are under construction at FMM. Minneapolis-Saint Paul (LCS 21) was christened in June 2019 and Cooperstown (LCS 23) will be christened later this month. Additional ships in various stages of construction include Marinette (LCS 25), Nantucket (LCS 27), Beloit (LCS 29) and Cleveland (LCS) 31.

The LCS is a fast, agile, mission-focused platform designed to operate in near-shore environments, while capable of open-ocean tasking and winning against 21st-century coastal threats such as submarines, mines and swarming small craft. The LCS is capable of supporting forward presence, maritime security, sea control and deterrence.