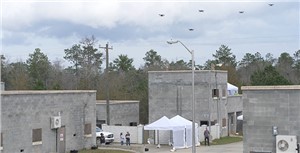 In its third field experiment, DARPA’s OFFensive Swarm-Enabled Tactics (OFFSET) program deployed swarms of autonomous air and ground vehicles to demonstrate a raid in an urban area. The OFFSET program envisions swarms of up to 250 collaborative autonomous systems providing critical insights to small ground units in urban areas where limited sight lines and tight spaces can obscure hazards, as well as constrain mobility and communications.

In an interactive urban raid scenario, Swarm Systems Integrator teams deployed their assets in the air and on the ground to conduct the DARPA-designed mission, seeking multiple simulated items of interest located in the buildings at the Combined Arms Collective Training Facility (CACTF) at the Camp Shelby Joint Forces Training Center in Mississippi.

The initial phase of the OFFSET swarm’s mission is to gather intelligence about the urban area of operations. In the field experiment scenario, AprilTags – a type of 2D bar code often used in robotics – were placed on and in buildings and throughout the urban environment to represent items of interest requiring further investigation and/or hazards to avoid or render safe. As the swarm relayed information acquired from the tags, human swarm tacticians adaptively employed various swarm tactics their teams had developed to isolate and secure the building(s) containing the identified items. Concurrently, separate subswarms also were often tasked to maintain situational awareness and continue observation of the surrounding environment. The complex scenario is designed to inspire and incentivize such dynamic employment of large-scale heterogeneous robotic teams to carry out these diverse tasks.

In the Camp Shelby experiment, Swarm Sprinters Charles River Analytics, Inc., Case Western University, and Northwestern University demonstrated the ability to integrate novel interactions and interface modalities for enhanced human-swarm teaming, which allows the human operator to use interactions such as gestures or haptic touch to direct the swarm. Carnegie Mellon University and Soar Technology incorporated their developments in operational swarm tactics, such as providing the swarm the capability to search and map a building or automate resource allocation.

“It has been fascinating to watch the Swarm Sprinters, who may not have been previously exposed to realistic operational settings, begin to understand why it’s so difficult to operate in dense, urban environments,” says Timothy Chung, the OFFSET program manager in DARPA’s Tactical Technology Office (TTO). “The Swarm Sprinters brought a number of novel technologies they have developed over the last 6-9 months and successfully integrated and tested their developments on physical platforms in real-world environments, which was exciting to see.”