LM Awarded $13.9 M to Continue Production and Fielding Advanced EW Systems for the US Navy 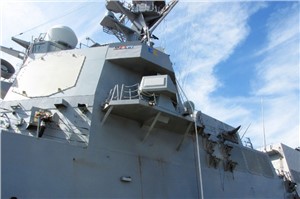 “We are proud to continue providing the U.S. Navy with ongoing engineering services for the SEWIP program. Our partnership and commitment to the Navy and to keeping our warfighters safe is our number one priority,” said Hamid Salim, vice president, Advanced Product Solutions, Lockheed Martin Rotary and Mission Systems. “The SEWIP system enables electromagnetic spectrum dominance for our naval fleet.”

This award is part of a five-year contract totaling $75 million if all options are exercised. Services include engineering efforts to perform analysis and design, document engineering baselines; and modification of systems, subsystems, and components for test and evaluation. Work will be performed at the corporation’s electronic warfare center of excellence in Syracuse, New York.

For over half a century, Lockheed Martin has provided more than 7,800 electronic warfare (EW) systems to the U.S. Army, Navy and Air Force. These are vital to protect the warfighter and give them an advantage for increased mission success.

Lockheed Martin has provided EW capabilities to airborne platforms like:

Tell a friend:
LM Awarded $13.9 M to Continue Production and Fielding Advanced EW Systems for the US Navy