Rheinmetall to Supply the Bundeswehr With Another 1,000 Trucks - Order Worth Almost EUR400 M

At the end of December 2019, the German Bundeswehr ordered a thousand logistic vehicles from Rheinmetall worth EUR382 million, including valued added tax. 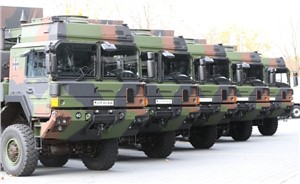 The order is the third call-off from a framework contract signed in July 2017 encompassing over 2,200 state-of-the-art military trucks, which the Bundeswehr is purchasing as part of its “Unprotected Transport Vehicles” project. Of the thousand vehicles just ordered, 675 have a five-ton payload, while the remaining 325 have a load-carrying capacity of 15 tons. Starting in January 2020, the trucks will be built at the Rheinmetall MAN Military Vehicles GmbH (RMMV) plant in Vienna, with delivery to be complete by the end of the year.

Awarded by the Federal Office for Bundeswehr Equipment, Information Technology and In-Service Support (BAAINBw) on 5 July 2017, the framework contract, which runs for a period of seven years, encompasses a total of 2,271 vehicles from RMMV’s HX family. As a first step, 558 vehicles were ordered right away. A further call-off of 252 vehicles followed in May 2019, and another 60 in November 2019.

Serving the twin modern imperatives of mobility and security, the Düsseldorf-based technology group is thus playing a key role in the project to modernize the Bundeswehr’s fleet of trucks, which includes thousands of vehicles. Most of the principal components – the engines, axles, transmissions and build-ons – are made in Germany. The vehicles are assembled at the RMMV plant in Vienna.

Particularly when it comes to multinational operations, the global presence of RMMV vehicles offers major advantages with regard to interoperability and logistics. Among others, current user countries include the United Kingdom, Australia, New Zealand and Denmark. Norway and Sweden have also placed substantial truck orders with Rheinmetall.

Tell a friend:
Rheinmetall to Supply the Bundeswehr With Another 1,000 Trucks - Order Worth Almost EUR400 M