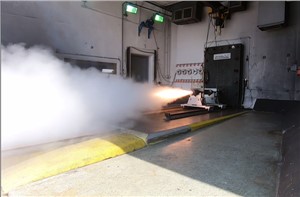 Aerojet Rocketdyne has finished a series of subscale propulsion-system test firings as part of a Defense Advanced Research Projects Agency (DARPA) effort to develop a ground-launched hypersonic missile for tactical use.

DARPA recently announced completion of the preliminary design review for its Operational Fires (OpFires) program, which is developing a two-stage missile capable of engaging high-value, time-sensitive targets from standoff range in contested environments. The effort to date has advanced the technology for an upper stage featuring a tunable propulsion system, according to DARPA.

“We’re proud to be on the DARPA team, leveraging our experience in hypersonic and missile technologies for the OpFires program,” said Eileen Drake, Aerojet Rocketdyne CEO and president. “We are eager to continue development work on this important program.”

DARPA last year awarded Aerojet Rocketdyne a $4.6 million Phase 1 contract to design propulsion concepts and technologies for OpFires. The contract included an $8.8 million option for Phase 2 of the program, which is expected to culminate in late 2020 with multiple test firings.

Aerojet Rocketdyne has long been a leader in hypersonic technology, which the Department of Defense has identified as a top technical priority.