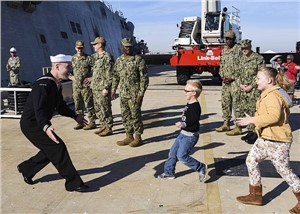 The newest littoral combat ship, the Freedom-variant USS Indianapolis (LCS 17), arrived at its homeport, Mayport, Florida Nov. 26. after completing its maiden voyage from the shipyard in Marinette, Wisconsin.

Prior to arriving in Mayport, LCS 17 officially joined the fleet Oct. 26 when it was commissioned in Burns Harbor, Indianapolis. It’s the 7th LCS ship to be homeported in Mayport under the leadership of Littoral Combat Ship Squadron Two.

“I’m proud to say that the crew did a phenomenal job during Indianapolis’ maiden voyage,” said Cmdr. Colin Kane, commanding officer of Indianapolis. “To get Indianapolis ready, we’ve been away from our families since July. Thankfully, we are home in time for the holidays.”

The ship falls under Commander, Littoral Combat Ship Squadron Two (COMLCSRON TWO) control until the future LCS Mine Countermeasures Division is established on the East Coast.

This year, the Navy commissioned six LCSs, bringing the total to 19 LCSs in the fleet. Most recently, the Freedom-class littoral combat ship USS Detroit (LCS 7) departed its homeport of Mayport, Florida for the U.S. Southern Command area of responsibility on its maiden deployment, Oct. 31.

LCSs are high-speed, agile, shallow-draft, mission-focused surface combatants designed for operations in the littoral environment, yet fully capable of open ocean operations. As part of the surface fleet, LCSs have the ability to counter and outpace evolving threats independently or within a network of surface combatants. Paired with advanced sonar and mine-hunting capabilities, LCSs provide a major contribution, as well as a more diverse set of options to commanders across the spectrum of operations.

LCSs will have an offensive punch at range, which then complicates matters for our adversaries. Any potential adversary has to worry about where all our ships are located because of the reach of the weapons systems that we're putting on them.