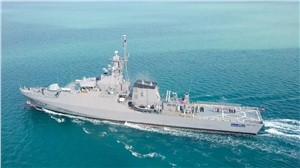 Thales has been a partner to the Royal Thai Navy for the last 50 years, since the first radars were contracted for the Tapi class frigates. With its established track record and numerous solutions from sensors to integrated combat systems for various vessels of RTN’s fleet, Thales is an integral partner to the RTN and celebrates the successful delivery of two major naval projects this year.

Modernising and extending Royal Thai Navy’s minehunting capabilities
On the 11th of June 2019, Thales delivered two modernised and upgraded minehunting vessels to the Royal Thai Navy. Built in the 1980s, HTMS Bang Rachan and HTMS Nong Sarai began their transformation in April 2016 when Thales was appointed as prime contractor for the upgrade of the vessels, including providing a full suite of underwater solutions onboard. This contract marked Thales’ first success in the underwater systems and sonars market in Thailand.

As prime contractor, Thales was wholly responsible for the revised vessel design, repairs and modernisation, the procurement of equipment and the platform integration. The upgraded ships are now equipped with new solutions including a machinery control system, navigation systems, upgraded communications capabilities, sonar and command and control (C2) system and a multi-influence signature range that allow mine-hunting to be conducted more safely, efficiently and faster to secure the critical sea lanes and sovereign waters of Thailand.

The ambitious turnkey project brought together Thales expertise from the UK, France, Australia, Germany and South Africa, working hand-in-hand with local industry to manage the upgrade. Together with its naval Key Industrial Partner in Thailand, Thales provided training and Integrated Logistics Support (ILS) for the Navy to ensure that the local teams are fully equipped with the skills needed to ensure the smooth operation of the vessels. The modernisation of the Bang Rachan vessels extends the operational life of the ships by over 15 years

Supporting RTN’s maritime security and Exclusive Economic Zones (EEZ) protection missions with Command and Surveillance Solutions
In a second project successfully delivered to the Royal Thai Navy in September 2019, Thales has equipped the RTN’s second Krabi-class Offshore Patrol Vessel (OPV) with a Command and Surveillance System that includes the TACTICOS combat management system at its heart.

HTMS Prachuap Khiri Khan was revealed in a launch ceremony in August in the presence of Her Royal Highness Princess Maha Chakri Sirindhorn. Final acceptance of the Thales contract was achieved in late September 2019 and the ship will strengthen the RTN’s maritime border control and marine resources protection capabilities. Thales is the lead system integrator and the integrated solution includes the VARIANT surveillance radar, fire control radar and VIGILE Electronic Support Measures. Thales is also supplying the Tactical Data Links and is responsible for all integration of internal and external communication systems onboard the vessel.

The successful and on-time delivery of these two projects this year establishes Thales’ position as the leading supplier to the Royal Thai Navy, equipping of 80% of RTN’s fleet. In a relationship that dates back five decades, Thales first entered the naval defence market with the WM22 and LW04 radars installed onboard the Tapi class Frigates. Over the years, Thales has built local indigenous capabilities in the country, including local training and service support, as it aligns with Thailand’s goal of strengthening high-end local industrial capabilities.

“We are extremely proud to celebrate fifty years of mutual cooperation with the Royal Thai Navy and to have been a continuous partner to their modernisation. The successful delivery of the Bang Rachan minehunters and the HTMS Prachuap Khiri Khan was made possible due to the close working relationships with the Royal Thai Navy and local industry. Thales affirms its commitment to strengthening local industrial capabilities in Thailand through training and technology-transfer. We look forward to a continued partnership with the Navy in the decades to come.” Massimo Marinzi, Country Director, Thales in Thailand