Kaman Receives Boeing Award for the A-10 Re-wing Program 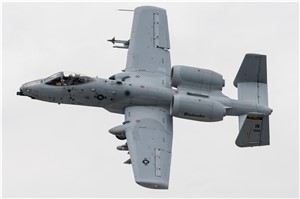 Kaman Aerospace Group, Inc., a subsidiary of Kaman Corporation (NYSE: KAMN) announced that it has been awarded an indefinite-delivery/indefinite-quantity (IDIQ) contract by The Boeing Company (Boeing). This new work package is for the manufacture of wing control surfaces and structural assemblies in support of the U.S Air Force (USAF) A-10 Thunderbolt Advanced Wing Continuation Kitting (ATTACK) program. Work for this program will be performed in its Jacksonville, FL facility. The USAF awarded Boeing a $999 million (ceiling) contract, which was announced in the Department of Defense release on August 21, 2019 to provide up to 112 new wing assemblies and up to15 wing kits through 2030.

Kaman is a leading supplier of complex aircraft structures and sub-assemblies, as well as sheet metal details, extruded parts and machined components for the commercial and defense aerospace industries. Kaman successfully delivered flight control surfaces to Boeing for 173 aircraft under the previous Wing Replacement Program (WRP) that ran from 2007 through to 2018. Under this new contract, Kaman continues to be a major supplier to Boeing in its effort to complete the upgrade of the remaining A-10 Thunderbolt II fleet. Kaman will deliver wing structural assemblies, which include the inboard and outboard flaps, slats, and deceleron/speed brake assemblies, including upper and lower speed brakes, trim tabs, and leading edge assemblies.

“Kaman Aerospace Jacksonville is honored to be selected by Boeing as a key supplier on the A-10 Thunderbolt Advanced Wing Continuation Kitting (ATTACK) program,” said William Zmyndak, Vice President and General Manager of Kaman Integrated Structures and Metallics. “Our established manufacturing ‘know-how’, experience with A-10 structures and knowledge of the Boeing requirements puts us in a ‘ready now’ position to execute this program. We have developed a great working relationship with Boeing to support our mutual Customer, the U.S. Air Force, in their efforts to extend the life of this iconic aircraft to 2030 and beyond.”

Tell a friend:
Kaman Receives Boeing Award for the A-10 Re-wing Program