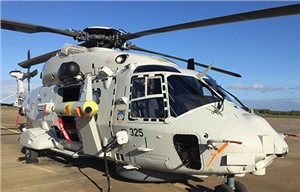 In 2012, Terma completed a study program for Royal Netherlands Air Force (RNLAF) to identify the best possible way of protecting the NH90 aircraft against IR seeking missiles. The study pointed out the MASE system as the preferred choice giving the best compromise between improved self-protection, mission/aircraft compatibility, cost and fleet commonality.

Based on inputs from key operational experts Terma was also contracted for installation of Hostile Fire Indicator System (HFI) to protect the aircraft against small arms fire. This additional capability is fully integrated into the MASE system based on data provided by the Missile Warning sensors.

The architecture of the MASE system is highly modularized, thereby prepared for future growth such as Directed Infrared Countermeasures (DIRCM) or new sensors.

The Pod is mounted on a dedicated carrier for optimum 360 deg. threat detection and countermeasures dispensing without compromising other NH90 capabilities. Control and operation of the system is provided through the Electronic Warfare Management System, ALQ-213.

The modularity of the MASE pod has enabled tailoring for a number of helicopter platforms, including AH-64D, EH101, Mi-17, Mi-24, and AS 550 Fennec.