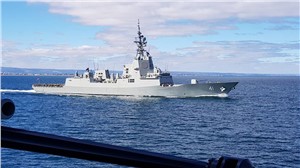 In a first for the Royal Australian Navy and the United States Navy, HMAS Brisbane has completed a live missile engagement.

Using remote sensor data from the USS Stockdale and the Cooperative Engagement Capability, the combat system was tested against a range of challenging targets and tactical situations.

Minister for Defence, Senator the Hon Linda Reynolds CSC said the trials which were held in the US over the past month, mark a ground-breaking milestone for Australia.

“This missile firing demonstrates the very highest levels of interoperability between our navies,” Minister Reynolds said.

“It reaffirms the game changing technology that the Aegis combat system brings to our Navy and the advanced capability of the Australian-built Hobart Class Destroyers.

“By conducting these trials in the US, our Navy is able to access the world’s best expertise, instrumented ranges and analysis capabilities to provide confidence in how the ship will perform in combat.”

The Hobart class of ships, commissioned by the Liberal National Government in 2007, are among the most potent warships at sea, forming an important part of the defence of our nation.

Cooperative Engagement Capability provides a secure communications capability between Australian and US equipped ships, aircraft or land forces and allows a unit to detect and, if needed, engage a threat identified by another ship or aircraft.

The trials mark the next step in the Hobart Class Destroyer’s introduction into service.