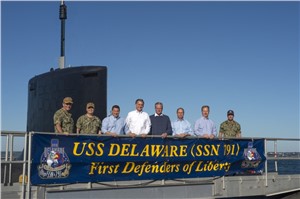 The Navy accepted delivery of the future USS Delaware (SSN 791), the 18th submarine of the Virginia class, Oct. 25.

"Delaware’s delivery marks the culmination of millions of man-hours of work by thousands of people across this country to bring the world's foremost undersea asset to the fleet," said Capt. Christopher Hanson, Virginia Class Submarine program manager. "This next-generation attack submarine provides the Navy with the capabilities required to maintain the nation's undersea superiority."

Delaware is the eighth and final Virginia class block III submarine. The ship began construction in 2013 and is scheduled to be commissioned on April 4, 2020.

Delaware is the seventh ship to bear the name of “The First State.” The first Delaware served in the American Revolution, the second in the Quasi-War with France. The third was burned to prevent her from falling into the hands of the Confederate navy. The fourth served blockading duties through the end of the Civil War. Little is known about the fifth, other than that she was a screw steamer that began life with another name before being renamed Delaware on May 15, 1869. The sixth Delaware was a battleship commissioned April 4, 1910, that served in the Atlantic and Caribbean. During World War I, she provided convoy escort and participated in allied naval exercises. She was decommissioned Nov. 10, 1923.

Tell a friend:
Future USS Delaware Delivered to the Navy