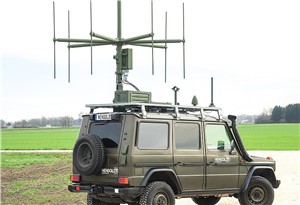 At this years’s ADEX exhibition in Seoul, the sensor solutions provider HENSOLDT focusses on its broad range of sensor technologies, a major part in the airborne solutions domain. The sensor solutions are deployed on various platforms, including helicopters, aircraft and unmanned aerial vehicles. Come and visit us at stand no B27 at ADEX in Seoul!

Hensoldtis presenting itslive air picture of its “TwInvis” passive radar system for the first time in Seoul. The TwInvis system, which can be integrated into an all-terrain vehicle or a van, does not emit its own signals to monitor air traffic, but simply analyses the echoes of signals from radio or TV stations.  Working as mere receivers, passive radar systems detect targets by analysing the signals reflected by them in response to third-party emissions.

“The highly sensitive digital receivers now make it possible for a single TwInvis system to monitor up to 200 aircraft in 3D within a radius of 250km, which opens up new options for civil and military applications”, says Nathan Manzi, head of Asia-Pacific at HENSOLDT.

When deployed in the civilian sector, passive radar can provide air traffic control with an inexpensive supplement to existing sensors, e.g. as a backup for other sensors or as an important sensor in areas with a lot of restrictions as a result of reflections off the slopes of mountains or other obstacles. Furthermore, passive radar can be used at small and medium-sized airfields, which previously had no primary radar. The fact that these systems do not emit their own signals allows security to be provided for critical infrastructures or large events in densely populated areas without occupying any transmission frequencies, which are in short supply.

In military applications, the system enables large-area surveillance using networked receivers, while offering the decisive operational advantage that “passive radar” systems cannot be located by the enemy. Further advantages include the option to deploy several interconnected systems to improve target acquisition in mountainous regions and the high level of resistance to disruptive reflections, e.g. from mountain slopes.

Another part of HENSOLDT’s display is dedicated to airborne solutions, including the family of Lightweight Crash Recorders, the ARGOS helicopter gimbals and the MILDS missile warning system family. HENSOLDT’s Lygarion is a family of wide-band line-of-sight data link solutions that enable secure exchange of real-time data between airborne assets as well as maritime platforms and deployable ground control stations. Its potential roles include intelligence, surveillance, reconnaissance and secure command and control platforms and weapons.

Tell a friend:
Hensoldt to Showcase Sensor Solutions at ADEX 2019