Leonardo Promotes its Helicopters and Defence Electronics at Seoul ADEX 2019 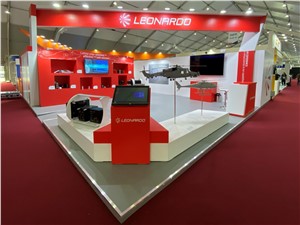 Leonardo is attending the Seoul International Aerospace & Defense Exhibition 2019 (ADEX) and will be demonstrating the successes of its existing products in the Republic of Korea (RoK) at stand B53. In addition, Leonardo will be promoting new solutions aiming to meet the Country’s demanding requirements for technology and industry cooperation.

The Company’s AW159 already provides world-class technology to the RoK Navy and the helicopter is the ideal solution for the service’s ongoing requirement of 12 units to provide antisubmarine (ASW) and anti-surface (ASuW) capabilities. The AW159 is an industry-leading maritime operations helicopter with superior agility that has already proven its ASW and ASuW capabilities during its operations with the RoK Navy. As well as delivering high-tech systems such as the AW159, Leonardo is committed to supporting the technology it delivers and widening partnerships in-country.

Leonardo’s AESA technology is crucial in the detection of submarine periscopes and surface threats and only AESA radar, like Leonardo’s Seaspray and the Osprey families of radars, offers a small target detection mode that can detect even the smallest targets in high sea states, such as submarine 'snort' masts or periscopes.

Leonardo Long Range Radars solutions (RAT-31 DL), both fixed and mobile, are ideal for the requirements of the Republic of Korea Air Force. An advanced, L-band, solid state solution for 3D surveillance, with an effective range of over 470 Km, the proposed solutions are based on proven and state-of-the-art “Nato Class 1” radars and answer the modernisation needs of Korean air surveillance capabilities.

Leonardo will also be promoting its AW101 helicopter and the AWHERO Rotary Unmanned Air System (RUAS) at ADEX and invites visitors to learn more at stand B53. The AW101 is a multirole helicopter capable of performing a wide range of specialised missions including airborne mine counter measures, amphibious support and VVIP transport.

The state-of-the-art AWHERO unmanned rotary-wing aircraft is a dual-use platform able to perform missions in land and naval domains. It is the only RUAS in its class that leverages on the design experience and expertise of a world-leading manned helicopter manufacturer.

Tell a friend:
Leonardo Promotes its Helicopters and Defence Electronics at Seoul ADEX 2019