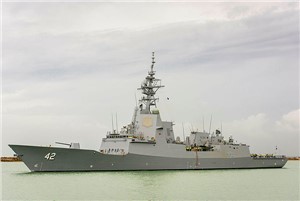 The initial trial phase will be followed by a more advanced phase of sea trials in October to test the ship’s combat and communications systems in preparation for delivery next year.

“Over the past decade, more than 5,000 people from across the Department of Defence, ASC, Raytheon Australia and Navantia have dedicated millions of hours of work towards delivering the most capable warships ever to be operated by the Royal Australian Navy,” Minister Reynolds said.

“This is underpinned by over 2,700 suppliers who have supported the AWD Alliance in its efforts to expand Australian Industry Capability for the overall Program.

“Through the AWD program we have created a local workforce with specialist shipbuilding and complex systems integration skills that will form the foundation for future shipbuilding projects in Australia.”