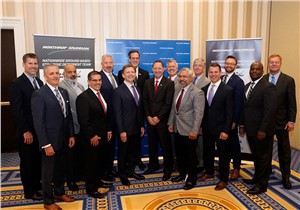 “Northrop Grumman has assembled a nationwide team of partners from across the defense, construction and engineering industries – rich in ICBM missile systems expertise – that is ready now to design, build and deliver a modernized strategic deterrence capability for our nation and its allies,” said Greg Manuel, vice president, GBSD enterprise leader, Northrop Grumman. “We are confident this GBSD team we have so carefully assembled over the past four years is positioned to deliver a safe, reliable and affordable GBSD system on schedule.”

“Our team will bring with it the capability, capacity and commitment to address this national security priority and deliver on this critical mission for our customer,” added Manuel.

On Aug. 21, 2017, Northrop Grumman was one of two companies awarded a three-year Technology Maturation and Risk Reduction contract for the new GBSD weapon system program. In July 2019, the Air Force released its final request for proposals for the next phase of the program, with an expected award date in the third quarter of 2020.

Last month, Northrop Grumman broke ground on a new facility, near Hill Air Force Base, to serve as a future headquarters for its workforce and nationwide team supporting the GBSD program, with the opportunity to add thousands of jobs in the state of Utah. Overall, the GBSD program will involve over 10,000 people across the United States directly working on this vital national security program.