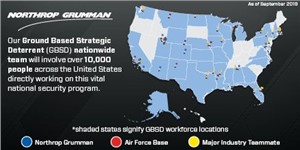 Aerojet Rocketdyne has been selected by Northrop Grumman to be an integral part of its nationwide Ground Based Strategic Deterrent (GBSD) team. Northrop Grumman is competing for the Engineering, Manufacturing and Development (EMD) phase of the GBSD program.

“Aerojet Rocketdyne is proud to be part of Northrop Grumman’s nationwide GBSD team and excited for the opportunity to provide a large solid rocket motor system and a post-boost propulsion system for this vital defense program,” said Aerojet Rocketdyne CEO and President Eileen Drake.

“Over the past three years Aerojet Rocketdyne has refined processes and built state-of-the-art facilities to mature our technology and increase affordability for the propulsion systems we will provide for the GBSD program,” said Drake.