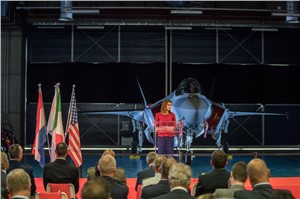 The first F-35 (009), which will be based in the Netherlands from this fall, was officially presented today in Cameri, Italy. There, the Italian company Leonardo is building the new fighter plane for manufacturer Lockheed Martin. The Italian aircraft manufacturer has a production line for wings and a final assembly line on which it assembles complete aircraft.

State Secretary Barbara Visser and her colleague Mona Keijzer from Economic Affairs and Climate were present at the ceremony.

Visser said “With the F-35 and later also the MQ-9 Reaper, the Air Force will get the nicest things that others are looking forward to. And it will be a wonderful year for Leeuwarden. In just 49 days, on 31 October, the Air Force will receive this aircraft there. It is fantastic that we work together in Europe to build the aircraft, but also to later maintain it."

"A perfect example of how national security and economic affairs go together", Keijzer responds. "The F-35 brings prosperity to the Netherlands in defense, economic growth and business innovation."

Test flights
Aircraft "009" will remain in Italy for a few more weeks, including for some test flights. Director Defense Equipment Organization, Vice Admiral Arie Jan de Waard, said “We accept the aircraft, and will then transfer it to the Air Force as quickly as possible. The less it remains with us, the sooner the user can get started with it."

In Cameri, Leonardo is building the F-35A for both its own air force and 29 units for the Netherlands. With the distribution of the largest contracts some 10 years ago, it was agreed that Italy would be assembling the aircraft while The Netherlands does the engine maintenance of at least the Italian and Dutch F-35s.

That happens at the Woensdrecht Logistics Center, where is also located the European "warehouse," that is to say the storage location for parts of the F-35.

Merging components
In Cameri the four main components of an F-35 are assembled. Leonardo itself builds one of those components, the wing section. Part of these is used for the on-sire final assembly process, but the vast majority goes to the Lockheed Martin factory in the United States. There, they are used to assemble aircraft for America, Australia, Denmark, Norway and South Korea, to name a few.

For the Netherlands, other F-35s are currently on the production line in Italy at various stages. The next one, the F-010, is expected to also come to the Netherlands this year.

The delivery of the final aircraft is now scheduled for mid-2023; The Netherlands will then have 37 aircraft.

Tell a friend:
First European-Built F-35 for the Netherlands Presented