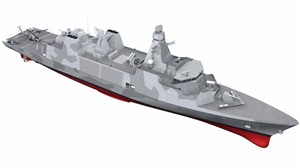 The Arrowhead 140 by a consortium led by defence firm Babcock was today selected by Whitehall as the design it wants for the five general purpose frigates to take their place in the Royal Navy’s line of battle alongside eight ‘souped-up’ Type 26 frigates currently under construction.

The five ships will be built in segments and assembled at Babcock’s yard in Rosyth – repeating the process of the Queen Elizabeth-class carriers.

“The Type 31 frigates will be fast, agile and versatile warships, projecting power and influence across the globe,” said Ben Wallace, Defence Secretary.

The firm, which has teamed up with Thales to design the new vessels, reckons around 2,500 people across the land will be involved in the construction of the ships and the supply chain.

With a firm eye on the export market, the 31s are viewed as being central to the UK’s shipbuilding strategy which Whitehall intends to reinvigorate over the coming decade – including creating a new ‘shipbuilding tsar’, Defence Secretary Ben Wallace, to work with other government departments, including training a new generation of skilled apprentices to meet the challenges and demands of building ships, boats and yachts in the 21st Century.

Around 150 new technical apprenticeships will be created building the five Type 31s. The ships will replace the existing general-purpose Type 23s – those not fitted with towed array and the full array of submarine-hunting sensors and systems (HM Ships Lancaster, Argyll, Monmouth, Montrose and Iron Duke) – which are reaching the end of their active lives.

“These mighty ships will from the next generation of the Royal Navy fleet. The Type 31 frigates will be fast, agile and versatile warships, projecting power and influence across the globe,” Mr Wallace said.

“The ships will be vital to the Royal Navy’s mission to keeping peace, providing life-saving humanitarian aid and safeguarding the economy across the world from the North Atlantic, to the Gulf, and in the Asia Pacific region.”

BAE on the Clyde is building the eight 26s, successors to the eight Type 23s which are dedicated submarine hunters, as well as capable of performing patrol/ security/board and search/humanitarian aid duties.

“It has been a tough competition and we are absolutely delighted that Arrowhead 140 has been recognised as offering the best design, build and delivery solution for the UK’s Royal Navy Type 31 frigates,” said Archie Bethel, Chief Executive Officer of Babcock.

“It is a modern warship that will meet the maritime threats of today and tomorrow, with British ingenuity and engineering at its core.”

Babcock will now begin detailed discussions with the MOD and supply chain before the award of a formal contract expected later this year.