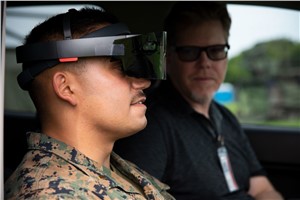 The prototype, known as Spectrum Hunter, is a radio frequency emission detection and localization technology that uses an augmented reality display aimed at increasing warfighter safety.

Warfighters use a plethora of equipment that emits RF waves afloat and on shore, including hand-held radios and cell phones, Wi-Fi, SOS beacons on aircraft and radar antennae on tanks, ships and structures. Emissions from these devices and others can be deadly if they are not deactivated properly during “radio silence” and an adversary detects them.

Warfighters currently use a 10-pound handheld tablet and a handheld sensor to detect and locate the source of their own radio waves; the RF source is more narrowly refined by walking and waving a wand (sensor).

“The Spectrum Hunter system under development is hands-free. As the user packs a similar-but-smaller geolocator receiver in a backpack and wears a headset inside a helmet that allows them to ‘see’ images of RF waves on an augmented reality screen superimposed over heavy sunglasses,” Sinclair noted. “The helmet is fitted with a sunshade so the equipment operates outdoors.”

Users can make verbal commands or hand gestures to make selections and interact with the augmented reality display to gain additional information about detected RF waves. The heads-up holographic user interface guides users toward the RF emission source without the harmful possibility of distraction from real world dangers such as moving people or vehicles.

“Our team is initially focusing on detecting handheld radios and will expand the scope later to detect cell phones and other devices,” Sinclair continued. “In the future, we plan to modify it to identify RF waves emitting from enemy forces.”

“The sky is the limit for potential uses for Spectrum Hunter,” said NIWC Atlantic Acting Executive Director Peter C. Reddy. “Augmented reality can enable an operator to more quickly and easily locate the source; this is a paradigm shift toward capabilities of the future.”

Sinclair’s team applied for and obtained a provisional patent and is sharing their concept outside the command. They continue networking with potential sponsors and developing multiple use cases to attract a program office or commercial vendor interested in transitioning the concept to a physical product.