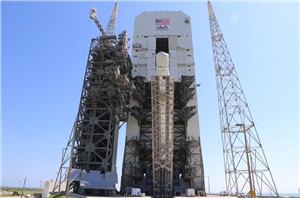 The Delta IV family of launch vehicles combines design simplicity, manufacturing efficiency and streamlined mission and vehicle integration to meet customer launch requirements. GPS III SV02 will be the 29th and final flight of the Delta IV Medium rocket and the 73rd GPS launch by a ULA or heritage vehicle.

“As we prepare to launch the final Delta IV Medium, we look forward to continuing its legacy through the purpose-built Vulcan Centaur,” said Gary Wentz, ULA vice president of Government and Commercial Programs. “We are proud to continue our strong support of the GPS program with this launch.”

The GPS III system, built by Lockheed Martin, represents the next step in modernization of the worldwide navigation network with a new generation of advanced satellites offering improved accuracy, better anti-jam resiliency and a new signal for civil users.

This mission will launch aboard a Delta IV Medium+ (4,2) configuration vehicle, which includes a 4-meter Payload Fairing and stands at 207 ft. The common booster core for Delta IV is powered by the RS-68A engine, and the Delta Cryogenic Second Stage is powered by the RL10B-2 engine, both supplied by Aerojet Rocketdyne. Northrop Grumman provided the two solid rocket motors.

ULA has a track record of 100% mission success with 134 successful launches.

With more than a century of combined heritage, ULA is the world’s most experienced and reliable launch service provider. ULA has successfully delivered more than 130 satellites to orbit that provide Earth observation capabilities, enable global communications, unlock the mysteries of our solar system, and support life-saving technology.