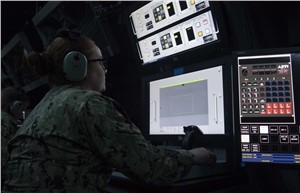 The Combined Integrated Air and Missile Defense (IAMD) and Anti-Submarine Warfare (ASW) Trainer – known as CIAT – opened its doors for training and hosted an open house for numerous commands and ships, July 12.

The new Naval Station Norfolk based CIAT – managed and operated by the Center for Surface Combat Systems (CSCS) – features a technical approach that originated during the early stages of combat system virtualization and technology exploration by Naval Surface Warfare Center (NSWC) divisions in Dahlgren, Va., and Carderock, Md.

What makes CIAT revolutionary compared to other shipboard training is its ability to replay decisions made during a scenario in a full screen debrief. Current shipboard training evaluations can feel subjective in nature – sometimes Sailors are left wondering what actually happened or what went wrong.

“The Navy as a whole has benefited from the engineering efforts and advancements, as other programs are now able to leverage and extend the virtualization and simulation improvements pioneered through CIAT,” said Higgins.

“The Navy’s acquisition program offices and warfare centers are developing and delivering phenomenal capabilities to our warships,” added Capt. Dave Stoner, CSCS commanding officer. “This trainer represents the best multi-warfare training anywhere. It is better than the systems we have on the ship. I wish I had this capability while I was in command of a warship.”

“Opening a new CIAT facility in Norfolk expands the Navy’s ability to train the surface fleet on complex air, surface, undersea, and ballistic missile threats we could face anywhere in the world today,” said Capt. Sam Pennington, PMS 339 program manager. “This state-of-the-art, high fidelity, trainer provides the ability for combat systems watch teams to build proficiency and validate combat effectiveness. CIAT provides an immersive experience that provides each watch team the same visual and audio indications they would expect to experience if operating their own systems aboard their ship in a deployed environment.”

Moreover, Warfare Tactics Instructors from the Naval Surface and Mine Warfighting Development Center have been utilizing the facility to test and refine new tactics.

“In the CIAT, we can tie together all console and headset communications against the scenario ground truth to show each team the cause and effect of every decision,” explained Mike Kroner, CSCS technical support deputy. “It is unlike anything we have seen in surface navy training.”

Currently, PCU Delbert Black (DDG 119) Sailors are in training as the first ship and crew to train at the new CIAT.

“The CIAT will revolutionize how we train our ships and Sailors,” said Lt. Cmdr. Brian Blankenship, CSCS Detachment Norfolk officer in charge. “With its combined set of high-fidelity simulation tools, integrated debrief capability, and realistic training environment, this trainer will have a profound effect on combat readiness by providing better trained, better qualified Sailors to the fight against the evolving threats.”