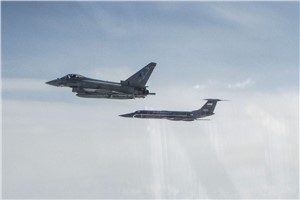 The Typhoons are operating from Ämari Air Base in Estonia in support of NATO’s Baltic Air Policing mission.

On Monday the fighter jets intercepted a Russian Antonov AN-26 “Curl” transport aircraft. Following this and on the same mission, the fighters later diverted to intercept a Russian TU-142 “Bear” Bomber and two SU-27B “Flanker” fighters.

Baltic Air Policing is a routine NATO mission for the Typhoons and provides reassurance that the UK is here to work in partnership with Estonia.

“These aircraft transiting the Baltic region were not on a recognised flight plan or communicating with Air Traffic Control. In the end, the intercept was uneventful and conducted in a professional manner throughout.”