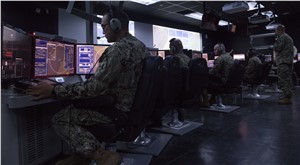 In the world of simulations, getting a system to act as close to authentic as the real-world situations it represents is always the main goal. Naval Surface Warfare Center (NSWC), Carderock Division develops high-fidelity acoustic simulation and training systems, giving naval personnel the ability to practice combat scenarios virtually.

The Combined Integrated Air and Missile Defense (IAMD) and Anti-Submarine Warfare (ASW) Trainer, better known as CIAT, made its official debut in December 2018 at Naval Base San Diego. In June, Naval Station Norfolk became the site for another CIAT installation. Motions to create this trainer began in 2014, according to Rich Loeffler, Carderock’s senior scientific technical manager, director for signatures, tactical decision aids and training systems (Code 705).

“CIAT is what we refer to as a Combat Systems Team Trainer,” Loeffler said. “Meaning that your goal is to bring in the whole portion of the crew that would be operating the combat system and train them in a shore site how they can best utilize the system when they are at sea.”

Carderock shares CIAT responsibilities with NSWC Dahlgren Division. Dahlgren is responsible for the overall system integration and manages the IAMD aspect of the trainer, while Carderock leads the development of the acoustic and ASW capabilities. Carderock also has capabilities that contribute to the IAMD training. Using the periscope simulation that creates a real-time visual simulation of what one could see through the periscope of a submarine, Loeffler said they were able to utilize that technology for the surface ship trainer in the CIAT.

“In this case, they have deck cameras if they want to be able to see when a missile launches from the forward or aft launchers. We basically provide the visuals for that,” he said.

By modeling the threats and the ocean environment and then stimulating the actual tactical combat system software, the CIAT system is highly flexible in the ability to train real-world scenarios. With the many possibilities of training situations that can be created within the CIAT comes the need to use multiple sources of knowledge to create effective training situations that will benefit the fleet.

“Our role here at Carderock has been to leverage signature simulation capabilities we have developed over the years across submarine, surface and surveillance ASW trainers and provide the system design, development, integration and testing support to implement the CIAT requirement to support the fleet’s training needs,” he said.

Before the CIAT existed, the Surface ASW Synthetic Trainer (SAST) was developed by Carderock as an on-board embedded training system within the AN/SQQ-89 A(V)15 Sonar system. Loeffler said beginning in 2008, they went through a series of large analyses to compare and contrast what the simulation produced with what operators saw at sea. The data from that testing helped further develop the SAST and subsequently create the CIAT. Now, they are able to represent all components of the operations they run from the physics modeling perspective, such as what sounds are generated and how they propagate through the water, interactions with interfering objects and sea-state effects on these variables.

“Since we’re acoustically stimulating the actual tactical software of the sonar system, the users are operating the systems just as they would at sea,” he said.

Loeffler believes that there is not anything off limits for what the CIAT can do, but adapting with new threats will require the right development within the trainer to represent the real-world situation. Although the system is relatively new, discussions on the next steps in the development of the trainer are already taking place with the help of Center for Surface Combat Systems (CSCS) defining and prioritizing fleet training requirements

“CSCS is basically the primary stakeholder that owns the surface-ship training schoolhouses, and they’ve done their requirements review to see what additional capabilities they’d like to see in the next version of CIAT,” Loeffler said. “So, we’re going through that process, assessing those requirements and looking for what would go into the next version to further improve training and also address training of the new combat system capabilities as they are being introduced into the fleet.”