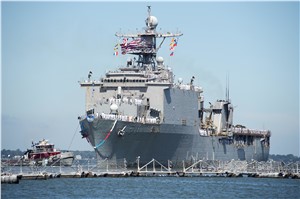 Carter Hall is scheduled to participate in UNITAS LX (60), hosted this year by Brazil, an annual exercise comprised of both Atlantic and Amphibious phases. UNITAS, which is Latin for “unity,” was conceived in 1959, first executed in 1960 and has been held every year since. This year marks the 60th iteration of the world’s longest-running annual multinational maritime exercise.  UNITAS develops and sustains relationships that improve the capacity of our emerging and enduring partners’ maritime forces to achieve common goals. This annual exercise fosters friendly, mutual cooperation and understanding between participating navies and Marine Corps.

Brazil will host the multinational forces from 10 countries to include Argentina, Brazil, Chile, Colombia, Ecuador, Mexico, Panama, Paraguay, Peru and the United States.

This year’s exercise, which is comprised of both Atlantic and Amphibious phases, is an annual exercise conducted in the Atlantic and Pacific waters around Central and South America. Participating forces will include 15 ships/vessels, 6 helicopters, 3 fixed wing aircraft and a submarine that will conduct operations in the region.

“We are looking forward to showcase the partnership between the U.S Navy and Marine Corps team with our partner nations, especially as it relates to amphibious operations and the ability to demonstrate maritime cooperation in a humanitarian assistance and disaster relief response scenario,” said Cmdr. Bruce W. Golden, Carter Hall’s commanding officer.  “Our Sailors and Marines have worked hard preparing to support UNITAS LX and they are excited to visit Brazil where they will get to participate in a Community Relations (COMREL) event, sporting events, and experiencing the Brazilian culture, history, and hospitality while on liberty.”

UNITAS is designed to train each navy and Marine Corps to conduct joint naval operations through the execution of littoral warfare, anti-piracy, maritime interdiction operations, countering transnational organized crime, anti-surface warfare, electronic warfare, communications exercises, and air and amphibious operations, in order to increase interoperability and capability between participating naval and marine forces. This year will also focus on demonstrating regional maritime cooperation in a humanitarian assistance and disaster relief (HA/DR) response scenario, as a means to develop a multinational maritime task force.

The Western Hemisphere is the shared home for the U.S. and our partner nations. Exercises like UNITAS reinforce our permanent geographical and cultural ties, connecting us to our shared history and our shared future.

Carter Hall is the second amphibious ship to bear the name. Carter Hall was launched October 2, 1993, and commissioned September 30, 1995. She made her maiden deployment to the Mediterranean on April 29, 1997.