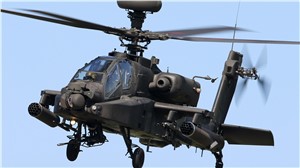 With a software-defined architecture, the AR-2000’s capabilities are mission adjustable through software reload. This design approach also allows the radio to adapt and grow with the changing threat environment by incorporating new waveforms as they emerge. The flexibility means the radio can support existing waveforms such as the Single Channel Ground and Airborne Radio System (SINCGARS), as well as address future requirements including networking.

“The AR-2000 is the latest example of our TruNet radio architecture, which has been designed for both airborne and ground radio applications,” said Troy Brunk, vice president and general manager, Communication, Navigation and Guidance Solutions for Collins Aerospace. “This provides our customers with a low risk, reliable and cost-effective approach to crypto modernization and multi-channel advanced networking operations no matter what the mission is.”

The demonstration of the AR-2000 provided simultaneous operation of two networks that connected both Collins Aerospace and other DoD inventory radios. One channel operated a multi-node networking waveform with shared voice, data, and video, while the second channel operated using the SINCGARS waveform.