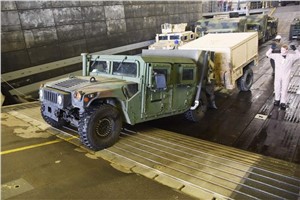 According to a new market intelligence report, titled "Global C5ISR Systems Market, Analysis and Forecast, 2019-2024", the C5ISR systems market is expected to reach $128.17 billion by 2024.

C5ISR technologies are the systems, procedures, and techniques used to gather and circulate information. They comprise intelligence gathering and distributing networks, and command and control networks, among others. Additionally, they also include hardware such as satellites, radios, relays, receivers, computers, routers, and other information technology infrastructures. Command and control, communications, computers, combat systems, intelligence, surveillance, and reconnaissance (C5ISR) technologies provide real time data to the commanders in the battlefield that aids them attain their situational awareness and supports them in decision making. C5ISR technologies achieve a different set of missions noticeable all around, i.e., on the ocean’s surface, air, land, and the space. C5ISR integrates all the four platforms (air, land, space, and sea), enabling interoperability and maximum utilization of military assets.

The high demand for defense electronics is majorly attributed by the global tensions persisted over the years. The need to tackle increasing problems regarding growing maritime disputes, traditional land-based conflicts, hybrid warfare, piracy over oceans, cyber-attacks, urban insurgency, and lone-wolf civil attacks is driving the C5ISR market. This rise in tensions has resulted in the increase of defense budget, globally.

The key manufacturers of C5ISR systems are continuously putting efforts toward the development of more advanced C5ISR systems for cost effectiveness and enhanced endurance. According to BIS Research Analysis, the global C5ISR systems market was $105.23 billion in 2018.

According to Surabhi Gupta, “Asia-Pacific (APAC) C5ISR systems market is expected to witness the fastest growth throughout the forecast period. The increase in the demand for C5ISR systems in Asia-Pacific is due to an impending need to address the issues of rising border tensions between the neighboring countries, increase in defense spending, and rise in the terrorist movements. China, Japan, South Korea, and India are majorly contributing to the growth of the market in the Asia-Pacific region. Europe and Asia-Pacific are the prominent regions for the development of C5ISR systems market. Moreover, owing to a less number of manufacturing companies in the Asia Pacific region, there is a vast scope of opportunities for both new and already established market players.

“The U.K., Germany, Russia, and France are some of the prominent countries in the European C5ISR systems market. The European market is likely to foresee numerous growth opportunities during the forecast period. The key factor pushing growth of these systems across the European countries is that these systems have become more modular, i.e., scalable, open, and service oriented architecture (SOA) based federated system. The demand for airborne command and control system is anticipated to exhibit a stable growth owing to the rise in demand for enhanced situational awareness, qualitative superiority, survivability and a dire need to upgrade obsolete special-mission platforms across the European countries. “In Middle East, Israel is a prominent country involved in the development of advanced C5ISR systems.”

The report provides a detailed analysis of the recent trends influencing the market, along with a comprehensive study of the future trends and developments. It also includes a competitive analysis of the leading players in the industry, including corporate overview, financials, financial summary, and SWOT analysis. The overall market has been segmented by applications, namely command and control, communication, computer, ISR, and electronic warfare. Another segmentation has been done on the basis of platform, namely land, air, naval, and space. The report also includes a comprehensive section on the geographical analysis including country analysis for more than 10 different countries.

This report is a meticulous compilation of research on more than 70 players in the C5ISR systems ecosystem and draws upon insights from in-depth interviews with key opinion leaders of more than 10 leading companies, market participants, and vendors. The report also profiles around 15 companies among which are Lockheed Martin, Northrop Grumman, Raytheon, Inc., and BAE Systems, among others.