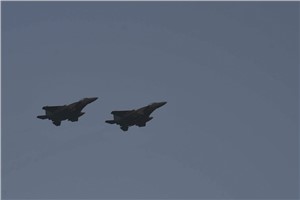 “The P-3C provides maritime domain awareness, can also function as a maritime air controller with long loiter times or employ its own weapons as required,” Willing said. “The USS Gonzalez is operating in the Arabian Gulf to guarantee international freedom of navigation.”

While the scenarios were simulated, the team practiced real world tactics, techniques and procedures to execute joint interoperability in maritime air control and dynamic targeting.

“By exercising the full operational process, we can identify and correct any issues that would slow or hinder rapid combat capability and seamless integration,” said Air Force Lt. Col. Benjamin Davidson, AFCENT Forces Division chief. “This builds a closer relationship between NAVCENT and AFCENT, that we can utilize when called upon to execute real-world operations. The improved lines of joint communication and coordination will further facilitate seamless execution during combat operations.”

The demonstration of flexible and adaptable joint operations shows U.S. military forces are even stronger together and prepared to respond to contingencies and defend the U.S. forces and interests in the region.

“This exercise demonstrated our ability to conduct operations in multiple domains simultaneously,” Davidson said. “When integrated properly, the combined strength of these assets is greater than their sum. We multiply the effects by creating increasingly complex challenges to the malign activities of our adversaries.