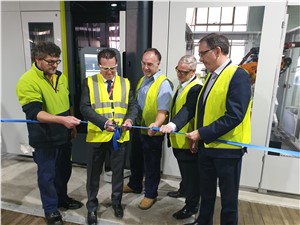 The new equipment brings Thales’s investment to more than $30 million in plant and equipment at Lithgow Arms since 2006.

Thales’s continued investment over more than a decade has unlocked the potential of the site, winning contracts and generating jobs and investment in Lithgow, the Central West and along the supply chain.

In order to maintain a capability advantage for Australia’s Defence Forces, Thales is investing in world class manufacturing capabilities that can be integrated with digital technologies, including 3D printing, advanced optical and targeting equipment and secure digitally networked systems.

Member for Bathurst, Paul Toole said that 92% of content used in production is sourced locally or made on site.

“I am delighted that more than 200 of Lithgow Arms’s suppliers are located in NSW, and over the last three years these suppliers have received almost $20 million in orders from Thales” Mr Toole said.

“Since 1912, the Lithgow Small Arms Factory (now known as Lithgow Arms) has proudly supported Australia’s soldiers on battlefields around the world,” he said.

Director of Soldier Weapons Systems, Graham Evenden, said that  Thales is investing significantly in its manufacturing capability and skills development to develop the world leading technologies for future products.

“Today’s unveiling shows our intent to build on Lithgow Arms’ distinguished heritage to develop and manufacture the next generation soldier weapons systems for the future Australian Defence Force.”