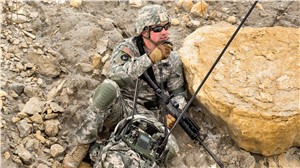 Collins Aerospace Systems, a unit of United Technologies Corp. (NYSE: UTX), has received its sixth order from the U.S. Army to provide PRC-162 software-defined ground radios for the Handheld, Manpack and Small Form Factor (HMS) program. This sixth order was issued under a multiple award contract that the Army awarded to Rockwell Collins and two other companies in 2016. The contract, which has a $12.7 billion maximum firm-fixed-price with an estimated completion date of March 2026, moves the Army another step closer toward modernizing communications on the battlefield.

The PRC-162 is a two-channel ground radio, both man-portable and vehicle-mountable, that will enable the Army to tap into next-generation communications capabilities such as the Department of Defense’s new Mobile User Objective System (MUOS) while maintaining interoperability with legacy waveforms. An open-architecture design also allows for software-upgradeable capabilities in the future.

“Success in today’s multi-domain battlespace depends heavily on secure and reliable communications,” said Phil Jasper, president, Mission Systems for Collins Aerospace. “We’ve applied decades of proven experience in airborne communications to provide the Army with a next-generation ground radio that will give troops a heightened level of situational awareness and a tactical advantage.”

The PRC-162 is a part of Collins Aerospace’s TruNet™ networked communications family of products, which includes ground and airborne radios, advanced networking waveforms, applications, and support and services that enable ground and airborne elements to exchange critical data, images, voice and video in real time.

Tell a friend:
Collins Aerospace gets 6th order from US Army for production of next-generation Manpack radios