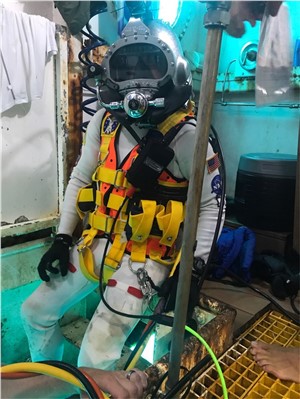 The Diver Augmented Vision Device (DAVD) team from NSWC PCD and partners recently joined forces with NASA at the Johnson Space Center during NEEMO-23, the 23rd voyage of the NASA Extreme Environment Mission Operations held at the Aquarius Reef Base underwater habitat in Key Largo.

The Aquarius Reef Base, operated by Florida International University, is the only undersea laboratory in the world located 5.4 miles off Key Largo in the Florida Keys National Marine Sanctuary, 62 feet below the surface. The Aquarius and its surroundings provide an ideal training and mission analog for space exploration by providing buoyancy similar to walking on the moon, or Mars.

The DAVD is a high-resolution, see-through heads-up display (HUD) embedded directly inside of a Kirby Morgan-37 dive helmet. This unique system provides divers with high-resolution visual displays of everything from sector sonar imagery (real-time topside view of the diver's location and dive site), text messages, diagrams, photographs, and even augmented reality videos.

NSWC PCD designed, developed, and tested the original DAVD prototype systems. The newest iteration of the system participating in this NASA mission is the DAVD Generation 1.0, developed under a Cooperative Research and Development Agreement with industry partner Coda Octopus Group, Inc.

Allie Williams, DAVD team lead engineer, said she is thrilled to see the leaps and bounds the project is making.

“It’s exciting to see dual purpose use for a system originally designed for navy divers, and it is an honor to work with NASA. This capability is game changing for divers who usually work in zero visibility conditions - it essentially gives them sight again through real time data and sonar,” said Williams. “Even in good visibility conditions, the DAVD system allows for hands free information and less mental strain of trying to remember topside instructions. The same benefits can be gained by astronauts as well – including better situational awareness, safety, and allowing them to be more effective in their missions.”

“You don’t achieve ‘warfighting dominance’ by taking 10 years to finally develop a rugged rotary dial phone,” said Gallagher. “You achieve it by becoming the collaborator of choice with academia, federal labs, and industry using innovative and creative partnerships. This allows us to develop emerging technologies into new capabilities and solutions for the Warfighter at a significantly accelerated pace.”

According to Gallagher, outcomes and lessons learned from the NEEMO-23 missions will provide insight needed to move the system one-step closer to space.

Naval Sea Systems Command Supervisor of Salvage, and the Office of Naval Research, are co-sponsors of the DAVD project.