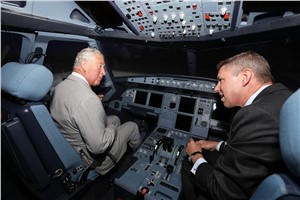 The state-of-the-art facility, located close to London Gatwick Airport, employs 350 people and is designed to meet the increasing airline demand for new pilots and to address the worldwide shortage of commercial pilots. The facility, which also designs, develops and builds the company’s leading RealitySeven Full Flight Simulator (FFS), will further strengthen the U.K.’s position as an epicentre for the commercial aviation industry.

The training center is already seeing strong demand, with 15 international airlines training pilots at the site. The facility also will support the company’s Airline Academy cadet training programs, which deliver the next generation of commercial pilots for many of the world’s largest airlines.

During the official opening, The Prince of Wales met young people who are soon to start on the Prince’s Trust Flying Scholarship, which was created by L3Harris as part of the RAF100 legacy. The scholarship was launched earlier this year and has the potential to support three young people each year for the next ten years. It will deliver a streamlined training course at L3Harris Airline Academy in Bournemouth on single-engine aircraft. The scholarship aims to support L3Harris’ and the Prince’s Trust’s shared goal of increasing diversity within the aviation industry and supporting more people to achieve their dream of becoming a commercial airline pilot.

His Royal Highness also met engineers and production apprentices who develop and manufacture the company’s leading commercial simulation devices. The Prince of Wales himself flew an L3Harris RealitySeven A320 simulator.

Parliamentary Under Secretary of State for Transport, Baroness Vere of Norbiton, who spoke with employees and guests during the opening ceremony, said, “This training centre will boost the local economy, helping our aviation sector continue to cement its place as one of the world’s very best. As we seek to build a fairer society, improving access to pilot training goes hand in hand with our work to increase diversity and female representation across the industry.”

“We are honored to have The Prince of Wales, Baroness Vere and other distinguished guests join us to mark the official opening of our new London Training Center. Our investment in this facility reflects our confidence in growth opportunities in the U.K. and the aviation industry, illustrated clearly by the demand for new airline pilots across the world,” said Alan Crawford, President, L3Harris Commercial Aviation Solutions.

The London Training Center includes a range of RealitySeven FFS, high-fidelity Flight Training Devices, Flat Panel Trainers, classrooms and briefing rooms. The production facility has a combined volume of more than 150,000 square feet with the capability to manufacture 30+ FFS a year.

L3Harris has been supporting U.K. customers for more than 100 years. The company has about 2,000 employees in 21 locations throughout the U.K., supporting a variety of government and commercial programs.