Fit For Success: AEHF Satellite Encapsulated and Prepared for Launch 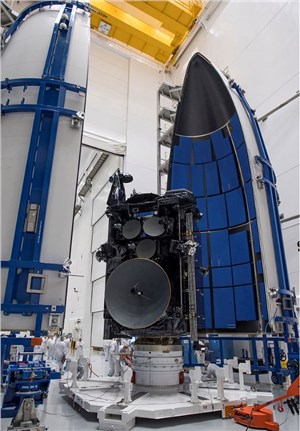 AEHF-5 is the most recent addition to the constellation that provides global, survivable, highly secure and protected communications for strategic command and tactical warfighters operating on ground, sea and air platforms.

This fifth satellite will add another layer of flexibility for provision critical strategic and tactical protected communications to the warfighter. This added resilience to the existing constellation will help ensure warfighters can connect globally to communicate and transmit data at all times.

"The team has worked exceptionally hard to get us where we are today, preparing to launch SV5 less than a year after we launched SV4, and I am proud of their contributions to the program," said Mike Cacheiro, vice president for Protected Communications at Lockheed Martin Space. "This is the result of commitment and dedication from the entire AEHF team and our partners at the US Air Force's Space and Missiles Systems Center."

Lockheed Martin developed and manufactured the satellite at their production facility located in Sunnyvale, California. After the satellite was built, it shipped to Cape Canaveral Air Force Station courtesy of a C-5 aircraft from the 60th Air Mobility Wing at Travis Air Force Base.

The AEHF team is led by the Military Satellite Communications Directorate at the U.S. Air Force's Space and Missiles Systems Center, Los Angeles Air Force Base, California. Lockheed Martin is the prime contractor for the AEHF.

Tell a friend:
Fit For Success: AEHF Satellite Encapsulated and Prepared for Launch