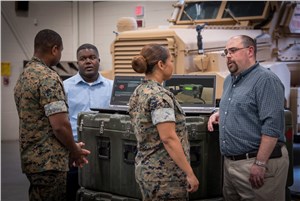 “We are the first team to embrace the submarine trainer technology, outside of the submarine community, and apply it to MUOS radios,” said Jack Buchanan, Marine Corps communication systems team lead at NIWC Atlantic.

The Multi-purpose Reconfigurable Training System (MRTS) platform, first introduced to the Navy in 2008 as a virtual, touch-screen system, simulates the exact equipment submariners use aboard a boat. The platform allows Sailors to train on submarine radio rooms virtually without having to set foot in a submarine.

Due to the Navywide success of virtual training for submariners, Buchanan connected with the NIWC Atlantic afloat submarine C4I MRTS training support team to collaborate on a similar virtual system as a practical application training solution for Marine Corps communicators.

“Warfighters of today are conditioned to use technology as an extension of their formal education,” said Deb Carbone, NIWC Atlantic MUOS project manager. “The ability to learn mission critical skills via a gaming software simulation makes it interesting and engaging, and it can be delivered wherever and whenever it is needed via laptops or tablets.”

The software development process took eight months due to many unique challenges. The location of equipment and computer security concerns restricted team members from filming and photographing radios, a step typically necessary in building an accurate virtual representation of the technical equipment.

Despite these obstacles, both the communication systems and afloat C4I teams worked tirelessly to develop the trainer currently offered as the practical application portion of the NET package Marines use today.

The NET package utilizes the virtual training to teach Marines how to request satellite access, verify radio programming and load crypto via hands-on virtual application. Marines can learn and practice operating and programming MUOS equipment from their laptops.

“By using the MUOS virtual trainer, we are providing the ability to train Marines who may have limited access to MUOS-capable hardware,” said Buchanan.

To date, more than 600 Marines have received training by the ground radio team utilizing the NET package.

“The team will continue with multiple rounds of the training through February 2020 with each MEF, and then the NET package will turn over to the Marine Corps Communications-Electronics School to conduct sustainment training with new Marines in the future,” said Smail.

The MUOS virtual trainer is also available for adaption for other Department of Defense (DoD) requirements.

“Since creating this model for the AN/PRC-117G, we have looked at expanding this technology for other waveforms that are already in use by the warfighter,” said Smail.

Smail explained that expanding the training system to support other functions is an easier process now, since the models and capabilities are in a government database and available for DoD-wide adoption.

“There is a lot of pride knowing something we developed, concept to fielding here in Charleston, is being utilized within the Marine Corps and making a difference in the knowledge level of the warfighter,” said Carbone.