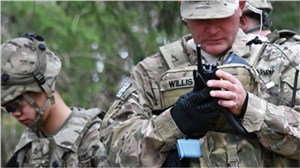 The key player assesses the military wearable sensors market at $179m in 2019.

Military wearable sensors are smart electronic devices which are located near, on or in the body to provide intelligent services. These sensors incorporate various features and functions such as personal networks, sensors, C4 communications, and the power to manage the systems. Also, these devices allow for the concept of enabling the connected soldiers which will aid them during crucial operations. Portable and wearables devices are highly valuable for soldiers. Hence, there has been a growing trend and demand of wearable technologies for wider military applications. Wearable technology is the smart use of technologies to assist soldiers during military operations.

The major application of wearable technology is in the military sector as it helps in monitoring the physical state of soldiers during missions, enhanced communication between troops and military stations, and providing all round situational awareness. Wearable sensors enable soldiers to be easily tracked, especially in operations that require high alertness, to monitor the safety of each soldier and the troop. Sensors are a crucial part of the technologies as these provide solutions to the defence operations, including measurements, monitoring and execution