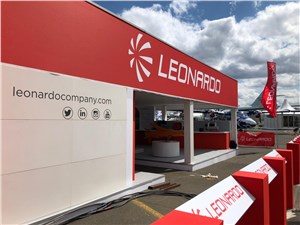 Leonardo will be flying high at Paris Air Show (17-21 June) following a string of commercial successes and significant progress in delivering its industrial plan. Having achieved advances in its helicopter business, consolidated its electronics activities and created a cybersecurity division, Leonardo is rapidly expanding its commercial presence around the world, opening offices across Europe, Latin America and Asia.

Leonardo continually strives to maintain its edge in unmanned capabilities and will unveil its new unmanned platform – the latest entry in the Falco family – during the show (17th June, Leonardo static area). Paris will also be the first opportunity for guests to see the AWHERO unmanned rotorcraft in its pre-production configuration with the Leonardo Gabbiano Ultra-Light radar installed on-board. Leonardo is investing heavily in unmanned capabilities and its new AWHERO production line in Pisa is just one example.

New, intelligent and autonomous modes of transport are also at the core of Leonardo’s drive for innovation and new capabilities, which is reflected in the Company’s on-going work in air traffic control, AI, big data, platforms and other systems that will enable the future aerospace ecosystem.

In the training environment, Leonardo is seeing the results of its strategic focus on the sector, with the Company now able to offer access to five training academies, the International Flight Training School (IFTS) in partnership with the Italian Air Force and a unique range of training aircraft and helicopters. More than 10,000 helicopter pilots and operators were trained at the Company’s schools in 2018 and the deployment of three additional M-346 aircraft to the IFTS is another milestone for the institution, which is well-regarded by fighter pilots worldwide and hosts a fleet of 21 aircraft in total. The new M-345 also makes its debut at the show, pitched to replace the current fleet of basic trainers in-service around the world and offering higher performance than heavy turboprop trainers at an affordable cost. The Italian Air Force ordered 18 M-345.

Amongst the areas in which Leonardo continues to invest is its combat aircraft portfolio, which includes proprietary products as the M-346 FA (Fighter Attack) equipped with the Company’s Grifo-346 radar. The M-346 FA is an extremely effective and low-cost tactical solution for the modern battlefield, as it offers all the M-346's Advanced Jet Trainer features as well as being able to perform close air support missions, battlefield air interdiction, homeland security and air policing missions and tactical reconnaissance, as well as providing support for personnel recovery operations in contested areas. In addition, guests will have a chance to see the pride of European combat aircraft cooperation, the Eurofighter Typhoon, flying at the show with Leonardo’s cutting edge avionics and sensors on-board.

For Leonardo’s helicopter business, the last few months have borne witness to notable achievements including the U.S. Air Force selecting the MH-139, with Boeing as prime contractor, and a contract award from Poland for the AW101 for anti-submarine and CSAR duties. In Paris, the Company will be exhibiting its world-class AW139, outfitted in a public-utility configuration. The AW139 has proven to be extremely popular, with 270 customers ordering over 1100 helicopters, making it the most successful aircraft in its class worldwide.

Dual use products are key to Leonardo’s strategic approach to its portfolio, with a recent major success, which saw Italy’s Guardia di Finanza order 22 AW169Ms for law enforcement, testifying to the effectiveness of this approach. This philosophy, which also applies to the Company’s unmanned systems, allows government operators to execute a wide range of missions at significantly reduced cost while maintaining safety and performance levels. Customers who have procured Leonardo helicopters also have access to the latest technologies in training and services thanks to virtual reality tools and data-driven flight diagnostics, both on show to visitors at Paris.

Leonardo is one of the few companies worldwide which can produce both platforms and the advanced electronics that they carry into operations. Some of the company’s products at the show will include the Osprey and Seaspray E-scan surveillance radars, sold to 30 countries, and the SAGE and SEER electronic warfare systems, which keep aircraft aware of potential threats. New for PAS 2019, the MAIR (Multi-Aperture Infra-Red) system will be exhibited for the first time, allowing visitors to see how the company has exploited its expertise in the InfraRed Search and Track (IRST) domain to create a threat warning system for aircraft that provides full spherical protection. The Company’s Skyward IRST will also be present, alongside the Miysis Directed InfraRed CounterMeasure (DIRCM) and BriteCloud expendable active decoy, which are latest-generation aircraft protection from InfraRed (IR) and Radio Frequency (RF) threats respectively.

Some guests at the show will be peering beyond aircraft and into the exciting possibilities offered by Leonardo’s cutting-edge Space capabilities. In the static area there will be a model of a second-generation COSMO-SkyMed satellite, Italy’s most ambitious space programme in the field of Earth observation. This satellite, which represents a giant leap forward in terms of technology, performance and operational life, is expected to be launched at the end of 2019. In partnership with the Italian Space Agency (ASI), Leonardo will also be revealing the first pictures from the PRISMA satellite, which is taking hyperspectral images that will allow researchers and the public to see the Earth as they have never seen it before.

Tell a friend:
Leonardo Flies to the World's Largest Air Show With a New Drone and its Latest Technologies in the Training and Unmanned Domains