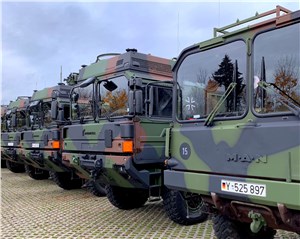 The German Bundeswehr has awarded Rheinmetall an order for 252 unprotected transport vehicles with payloads of five and fifteen tonnes. This order falls under the framework agreement concluded in 2017 for more than 2,200 state-of-the-art military trucks. The order value of the 252 trucks just ordered comes to around €92 million, including value added tax. Before the end of 2019, Rheinmetall MAN Military Vehicles GmbH (RMMV) will build and deliver the vehicles, which include a total of 161 5-tonne trucks and 91 15-tonne trucks. Production of the lot just ordered will commence directly after completion of the first lot of vehicles, which are due to be delivered during the next few months, right on schedule.

Encompassing a total of 2,271 unprotected transport vehicles from RMMV’s HX family, the framework agreement concluded on 5 July 2017 with the Federal Office for Bundeswehr Equipment, Information Technology and In-service Support (BAAINBw) is worth around €900 million (without VAT), including special tools and training services. As a first step, an order was issued for an initial lot of 558 vehicles.

In undertaking this large-scale project, the Düsseldorf-based Group for mobility and security solutions is making a major contribution to modernizing the Bundeswehr’s fleet of trucks, which numbers in the thousands. Consisting primarily of components made in Germany, e.g. the engines, axles, transmissions and build-ons, the vehicles will be assembled at the RMMV plant in Vienna.

Particularly when it comes to multinational operations, the widespread global presence of RMMV vehicles results in major advantages with respect to interoperability and logistics. Among others, current users include the armed forces of the United Kingdom, Australia, New Zealand and Denmark. Norway and Sweden have also placed substantial orders for trucks made by RMMV.