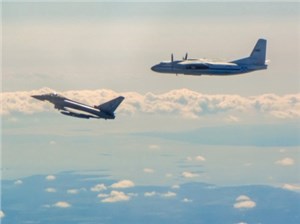 Working in partnership with the Estonian authorities, this was a routine NATO airspace policing mission for the Typhoon detachment providing continued reassurance in the region.

This is the sixth QRA scramble and intercept since the RAF took over enhanced Air Policing (eAP) from the German Air Force on 3 May 2019 as part of Baltic Air Policing.

"We were scrambled to intercept an Antonov AN-24 Russian military transport aircraft (NATO Callsign ‘Coke’) that was flying in international airspace close to Estonia from the south."

"Approximately ten minutes later we were re-tasked to intercept an additional Antonov AN-26 transport aircraft (‘Curl’) which was following the same routing as the first."

"Both intercepts were routine and carried out in a safe and professional manner."

The Royal Air Force is deployed on Operation AZOTIZE in Estonia in support of Baltic Air Policing.

The UK operates in support of NATO to reassure our allies and is a further demonstration of the UK’s commitment to the security of the region.