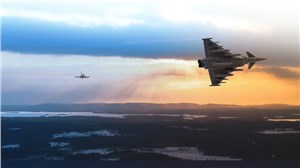 A spectacular air display from the UK Royal Air Force’s Eurofighter Display Team will take to the skies at this year’s Turku Air Show.

The RAF’s Eurofighter Display Pilot, Flt Lt Jim Peterson, will perform a high-intensity demonstration at the event on 15 and 16 June, designed to showcase the power, speed and impressive agility of the multi-role combat aircraft.

Eurofighter, which is being considered as part of the HX programme to replace Finland’s current fleet of F/A-18 aircraft, was one of the highlights of last year’s Finnish Air Force 100th Anniversary Air Show in Jyvaskyla and the Finland 100 Anniversary Air Show, which took place in Helsinki in 2017.

Alongside the display, a static Eurofighter will also be on show in Turku. BAE Systems and the European Eurofighter partner companies will participate in the air show, presenting more information on the Eurofighter offer to HX and highlighting some of the latest leading-edge technologies, capabilities and industrial partnership opportunities associated with the proposal.

Managing Director of BAE Systems Finland, Paul Hitchcock, said: “The Eurofighter display has been one of the highlights of recent air shows in Finland and we are delighted that the RAF’s Display Pilot will be back in the air in Turku this year. The capabilities of this aircraft are continually evolving as new technology is developed and, alongside our European partners, we are looking forward to bringing Eurofighter to Finland once again.”

Details of the Eurofighter bid were revealed at a press conference in Helsinki, as the UK Government, on behalf of the European consortium including Germany, Italy and Spain, submitted the formal Eurofighter Request for Quotation response to the HX programme.

The Eurofighter platform is designed to meet rapidly emerging challenges, missions and environments for the next 40-plus years. The proposal to HX would give Finland full operational control over its aircraft, as well as support and maintenance, and will provide access to aircraft mission data. It proposes a system which will integrate easily with existing Finnish systems and provide leading capabilities to ensure Eurofighter can operate alongside any generation of aircraft today and tomorrow, delivering mission effectiveness in the most austere or contested of environments.

Tell a friend:
Eurofighter to Display at Turku Air Show