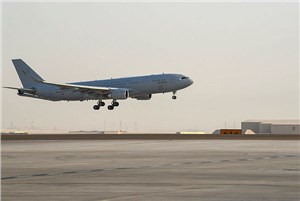 Despite its territorial defeat, Daesh continues to pose a security threat in the Middle East region and beyond. The KC-30A will provide important air-to-air refuelling capability, which is essential to sustain effective Coalition air operations in the region.

Commander of Air Task Group, Group Captain Paul Long, said the aircraft was one of the most advanced air refuelling platforms of its type in the world, generating greater reach for Coalition air operations.

“The KC-30A can operate at long ranges, delivering significant payloads of fuel to a wide variety of Coalition aircraft,” Group Captain Long said.

The aircraft is equipped with two forms of air-to-air refuelling systems, which allow it to refuel almost all aircraft including the F-16 Falcon, F/A-18 Hornet variants and the F-35A Lightning.

Australia’s presence in Iraq remains at the request of the Iraqi Government. Australia continues to work closely with the Iraqi Government and Global Coalition partners to counter Daesh and eliminate the threat to the region and broader international community.