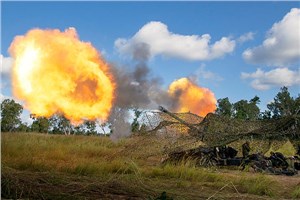 Japan Ground Self Defense Force (JGSDF) personnel have successfully fired two FH-70 howitzers out to 25 kilometres while in Australia.

This marks a historic first for the JGSDF, as there is no military range large enough in Japan to conduct such a long-range firing activity.

The firing of FH-70 howitzers out to 25 kilometres is part of a suite of initiatives agreed to during the Australia-Japan Foreign and Defence Ministers’ Meeting in October 2018 which explored opportunities to increase the complexity and sophistication of our combined military exercises.

Captain Yutu Goto, a Fire Direction Officer for the JGSDF, said he was grateful to be able to use the Shoalwater Bay Training Area for their first ever long-range howitzer firing activity.

“The opportunity to be able to conduct this firing activity in Australia’s large training area has been very beneficial for the Japan Ground Self Defense Force,” Captain Goto said.

Commander of the Australian Army’s 7th Brigade, Brigadier Andrew Hocking, said Japan’s first ever 25-kilometre howitzer firing activity was a success for the JGSDF and the exercise.

“The Japan Ground Self Defense Force should be proud of the achievements it has made during this exercise and we were proud to be a part of it,” Brigadier Hocking said.

“The capability is complex, so to prove that their munitions and guns are effective at that range is a real accomplishment.

“This not only gives the Japan Ground Self Defense Force confidence, but it also gives us even more confidence to work closely with each other in support of peace and security,” he said.

Exercise Southern Jackaroo is just one example of the continued growth in Australia and Japan’s Defence relationship and the benefits of bilateral and trilateral defence training and exercising.

This exercise involved over 150 JGSDF troops along with around 300 United States Marine Rotational Force – Darwin members and over 260 soldiers from the Australian Army’s 7th Brigade.

Australia, Japan and the United States have shared interests in peace, security and prosperity in the Indo-Pacific region. Exercise Southern Jackeroo demonstrates the close defence relationship between the countries, shared commitment to increasing interoperability and deepening the sophistication of trilateral exercises.