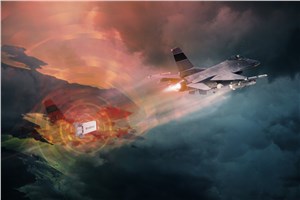 Leonardo has announced at the Electronic Warfare Europe conference (Stockholm, 13-15 May) that the United States Department of Defense has selected its BriteCloud expendable active decoy (EAD) to be evaluated under the US Foreign Comparative Testing (FCT) programme. The mission of the FCT programme is to find, evaluate and field products and technologies produced by US allies, such as the UK, where these products have a high technology readiness level in order to satisfy valid defence requirements more quickly and economically.

The Air National Guard (ANG) will lead this FCT by evaluating BriteCloud as it is launched from countermeasure dispensers installed on US Air Force ANG aircraft. During the trials, ANG F-16 jets will dispense BriteCloud rounds, demonstrating the ability to enhance F-16 survivability. BriteCloud will be tested in a variety of challenging scenarios to provide a high level of confidence in the performance of the system.

BriteCloud is a compact, self-contained radio-frequency (RF) countermeasure system that is launched by a combat aircraft pilot to defeat attacks from radar-guided missiles. Effective against the latest and most-advanced radar-guided threat systems, BriteCloud provides an extra layer of survivability for pilots. By completely separating from its host aircraft and falling away, the decoy improves aircraft survivability by guiding the incoming missile away from the aircraft.

First deliveries of BriteCloud by Leonardo to the RAF went into service on-board UK Royal Air Force Tornado jets in April 2018. In late 2017, following extensive testing, the UK MOD approved the BriteCloud 55 (named for its compatibility with 55mm flare dispensers such as those on Tornado, Typhoon and Gripen aircraft) for operations and production.

BriteCloud is just one of Leonardo’s world-class electronic warfare products. Leonardo is the number one supplier of electronics to the UK for military aircraft and a successful exporter: products such as the Company’s Helicopter Integrated Defensive Aids Suite (HIDAS), SEER radar warning receiver and SAGE electronic support measure have been sold internationally. Leonardo backs its products with a market-leading Electronic Warfare Operational Support (EWOS) service.