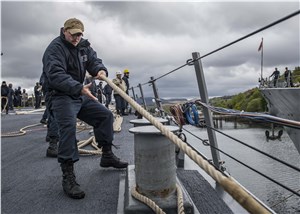 The Arleigh Burke-class guided-missile destroyer USS Carney (DDG 64), along with units from eight partner nations, is off the coast of the Outer Hebrides, United Kingdom, for the U.S.-led multinational exercise Formidable Shield 2019 (FS 19), May 8.

“Carney nation, along with our allies and partners, is ready to demonstrate our collective resolve to deter aggression,” said Cmdr. Tyson Young, commanding officer of Carney. “We have been training since the close of Joint Warrior 19-1 and are looking forward to building stronger interoperability relationships for the sake of a stronger global security environment.”

The conduct of FS 19 ensures the interoperability of NATO allies and partners to respond to IAMD threats. This exercise, which is scheduled to conclude May 19, is the second in a series committed to demonstrating high-end war fighting capability.

The participating countries are Canada, Denmark, France, Italy, the Netherlands, Norway, Spain, the United Kingdom and the United States. In total, there are 13 ships, more than 10 aircraft and approximately 3,300 personnel participating in this exercise.

U.S. 6th Fleet, headquartered in Naples, Italy, conducts the full spectrum of joint and naval operations, often in concert with allied and interagency partners, in order to advance U.S. national interests and security and stability in Europe and Africa.