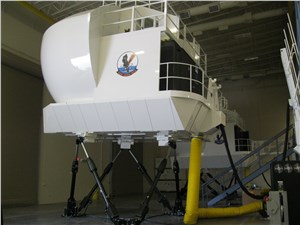 On the eve of the International Training and Education Conference (ITEC), Europe’s largest show for military training and simulation, CAE announced that Boeing has ordered simulator hardware for an additional P-8A operational flight trainer (OFT) for the United Kingdom Royal Air Force (RAF).

This follows a contract award last year for CAE to design and manufacture the hardware for the first P-8A OFT for the RAF as well as a P-8I OFT for the Indian Navy.

In addition, CAE developed and delivered a P-8 operational flight trainer integration asset, which is used by Boeing as an engineering development tool to test and validate aircraft and simulator upgrades for the United States Navy, Royal Australian Air Force, and other international customers.

“We are pleased to continue supporting Boeing on the development of P-8 training systems for the international customers acquiring this advanced maritime patrol aircraft,” said Ray Duquette, President and General Manager, CAE USA.  “The United Kingdom and India will now join the U.S. Navy and Australia in leveraging high-fidelity synthetic training as part of their overall P-8 training curriculum.”

The P-8 OFTs for the RAF and Indian Navy will be similar to the P-8A OFTs that CAE and Boeing have already developed for the U.S. Navy and Royal Australian Air Force. CAE designs and manufactures the P-8 OFT hardware to Level D standards, the highest qualification for flight simulators. CAE also provides the 737-800 OFT software baseline and simulation-based software lab environment that is used for the P-8 OFT development and integration tasks. CAE then delivers the simulators to Boeing, who designs, installs and integrates software specific to the P-8 aircraft.