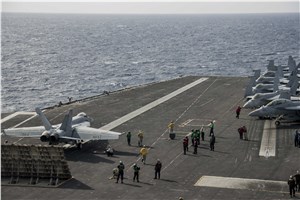 “The strategic mission is to engage and strengthen our partnerships with countries around the Black Sea,” said Cmdr. David Dartez, commanding officer of the “Fist of the Fleet,” Strike Fighter Squadron (VFA) 25, one of the nine squadrons of CVW-7. “This shows our capacity to operate freely with our allies to complete our mission of fostering security and stability in the region.”

“This is among the first missions we’ve executed with Romania,” said Lt. Gerard Anderson, a pilot with VFA-25 and the coordination lead of the exercise. “They’re one of our allies, and it’s beneficial to integrate with different countries to show the world what we’re capable of.”

Using Romanian JTACs enhanced the squadrons’ targeting capabilities, increasing readiness and lethality. A major focus of Abraham Lincoln CSG’s mission in its deployment, enhancing interoperability among allies was a key element of the exercise.

“Exercises like this strengthen defense capabilities against any potential threats in the European theater,” Anderson said. “Our North Atlantic Treaty Organization (NATO) alliance is a critical tool for maintaining security and stability in the region; this demonstration builds competence and confidence in our ability to do just that.”