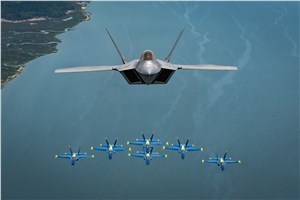 In a historic moment for aviation, the F-22 Raptor Demonstration Team flew alongside the U.S. Navy Blue Angels in a rare formation over the skies of Beaufort, South Carolina, April 25.

The two aerial demonstration teams joined together during the Marine Corps Air Station Beaufort air show to showcase never-before-seen images of both the F-22 Raptor and F/A-18 Hornet.

“This formation represents more than just the seven jets captured on camera,” said Maj. Paul Lopez, F-22 Raptor Demonstration Team commander. “It is a representation of the professionalism and excellence that every service member portrays in the United States military.”

The concept for this unique formation began as an idea between two former squadron-mates who both share a passion for aviation. Douglas Glover, 3G Aviation Media co-founder and the mastermind behind coordinating this dissimilar formation, reached out to U.S. Navy Maj. Jeff Mullins, Blue Angels #4, about the possibility of getting the two teams together.

“What started as a ‘what if’ between myself and Blue Angels #4, took months and months of back and forth, matching aircraft capabilities to the images requested by both teams,” Glover said. “All of the hard work, the late nights and the elevated levels of stress briefing a room full of top-tier pilots was worth it when the ramp dropped behind the photoship, followed closely by the F-22 and the Blue Angels’ diamond.”

Seeing the world’s premier fifth-generation fighter alongside the iconic blue and gold of the U.S. Navy Blue Angels is a sight many wanted to see but never thought would happen. The end result, seven fighter jets from two separate services flying over the skies of South Carolina, involved a joint effort that will be cherished for years to come.

“I would like to thank the maintainers that fix, service and maintain the aircraft. They are vital to our mission and making a flight like this happen,” Lopez said. “Flying alongside the Blue Angels was an incredible experience and seeing it all from the cockpit of the F-22 is something I will never forget.”