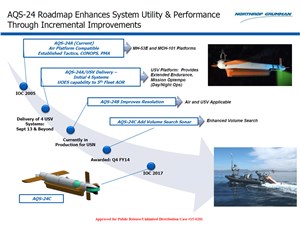 Northrop Grumman Corporation (NYSE: NOC) will showcase a variety of its defense technologies for land, air and sea-based platforms, as well as its military and commercial satellite technologies, at the International Defence Exhibition and Conference (IDEX) 2019, Feb. 17-21, at the Abu Dhabi National Exhibition Centre. Northrop Grumman will be exhibiting at booth #03-A04.

“For decades, Northrop Grumman has been building partnerships in the Middle East to support economic diversification, especially in the area of global security technology,” said Walid Abukhaled, chief executive, Northrop Grumman Middle East. “We look forward to highlighting our expertise in products and solutions that meet critical security challenges.”

Northrop Grumman’s exhibit will feature its Bushmaster® Chain Gun® family of medium-caliber automatic cannons, in addition to advanced ammunition types that increase the guns’ capabilities. Also on display will be the company’s Precision Guidance Kit for artillery, now in its second year of production and fielded to U.S. and allied forces, as well as advancements in large caliber ammunition that support main battle tanks.

The company will also demonstrate its air combat and crew protection capabilities, which include a special mission aircraft to conduct reconnaissance and combat missions, and the ability to integrate the Palletized Weapons System onto cargo aircraft to rapidly transform them into weaponized platforms. Likewise, technologies that identify incoming missiles (AAR-47) and warn of hostile small arms fire (ShotFinder) round out the air capabilities displays.

Northrop Grumman’s space-based technologies on display will include the GEOStar™-3, which supports satellites with an extension capability, providing up to 8,000 watts of increased battery power to the payload at its end-of-life. The company’s Mission Extension Vehicle, a spacecraft designed for satellite servicing and space logistics, provides rendezvous operations and docking features that also extend satellite life.

Key Northrop Grumman products to be shown at the NAVDEX pier include the remote-controlled Mine Hunting Unit and AQS-24B Mine Hunting System, which provide underwater mine detection, classification and identification from an unmanned surface vessel.